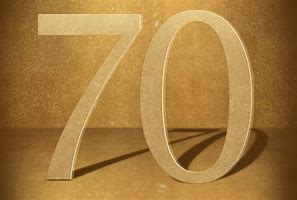 The “seventy weeks” prophecy, found in Daniel 9 begins with Daniel praying for Israel, acknowledging the nation’s sins against God and asking for God’s mercy. As Daniel prayed, the angel Gabriel appeared to him and gave him a vision of Israel’s future.

In verse 24, Gabriel says, “Seventy ‘sevens’ are decreed for your people and your holy city.” The seventy “sevens” should be understood as seventy “weeks” of years, in other words, a period of 490 years. These verses provide a “timeline” that gives us an idea of when the Messiah would come and some of the events that would accompany His appearance.

IF YOU UNDERSTAND DANIEL’S SEVENTY WEEKS

YOU WILL UNDERSTAND THAT WE ARE IN THE FINAL DAYS

OF THE FINAL WEEK

AND THE “GREAT AND TERRIBLE DAY OF THE LORD”

WE MUST BE READY

The prophecy divides the 490 years into three smaller units:

Verse 25 says, “From the time the word goes out to restore and rebuild Jerusalem until the Anointed One, the ruler, comes, there will be

The prophecy contains a statement concerning God’s six-fold purpose in bringing these events to pass:

Verse 24 says this purpose is:

1) “to finish transgression,” (that is, to end man’s rebellion toward God)

4) “to bring in everlasting righteousness,” (that is, the quality of being morally right or justifiable)

5) “to seal up vision and prophecy,” and (that is, to confirm these prophetic visions)

6) “to anoint the most holy.” (that is, to anoint, or to confer divine or holy office upon; in this case the Holy One, Jesus.)

Notice that the results of this six-fold purpose concerns the total eradication of sin and the establishing of righteousness.

The prophecy of the 70 weeks summarizes what happens before Jesus sets up His millennial kingdom.

*Of special note is the third in the list of results: “to atone for wickedness.” Jesus accomplished the atonement for sin by His death on the cross (Romans 3:25; Hebrews 2:17).

The Fulfillment of the 70 Weeks

*Gabriel said the prophetic clock would start at the time that a decree was issued to rebuild Jerusalem. From the date of that decree to the time of the Messiah would be 483 years.

The Final Week of the 70 Weeks

The prophecy of the 70 weeks is complex and detailed

However, if you will put biased denominationalism aside, and read the prophetic scriptures, first for their plain face-value, then secondly, read them in the context of the entire Bible, an amazingly clear picture emerges. You will find the Pre-Wrath, pre-millennial view.

One thing is certain: God has a time table, and He is keeping things on schedule. God tells us of He has planned the beginning and the end (Isaiah 46:10), and we should always be looking for the triumphant return of our Lord (Revelation 22:7).

Daniel 9:25 “So you are to know and discern that from the issuing of a decree to restore and rebuild Jerusalem until Messiah the Prince there will be seven weeks and sixty-two weeks; it will be built again, with plaza and moat, even in times of distress.

26 “Then after the sixty-two weeks the Messiah will be cut off and have nothing, and the people of the prince who is to come will destroy the city and the sanctuary. And its end will come with a flood; even to the end there will be war; desolations are determined.

27 “And he will make a firm covenant with the many for one week, but in the middle of the week he will put a stop to sacrifice and grain offering; and on the wing of abominations will come one who makes desolate, even until a complete destruction, one that is decreed, is poured out on the one who makes desolate.”

Remember, the “times of distress” is another name for the breaking of the 1st through the 5th Tribulation Seals, which began in AD 1.

The “final week” of Daniel’s 70 week, is the 7 years of The Great Tribulation, which will commence with the breaking of the 6th Seal of The Tribulation.

The middle of this final week, (which is 3 1/2 years after the breaking of the 6th Seal), is the Mid-Tribulation point and is found at the Blowing of the 7th Trumpet of God’s Wrath.

The flood, found in Daniel 9, verse 26, this time refers to “a flood of people”, that is to say that Jerusalem and her temple would be destroyed again by an overwhelming army. (This occurred in AD 70 with the destruction of the 2nd Temple).

This was foreshadowed by the Great Flood in Genesis

“A flood” was repeated in the Heavens by the old Dragon and manifest on the earth in the crucifixion of Christ.

NOTE: Verse 26 says, “And its end will come with a flood; even to the end there will be war; desolations are determined.” Each of the instances of “A Flood” came devastation. Each time God used “a flood” for the purpose described in Daniel 12:10, “Many will be purged, purified and refined” and made ready for the Kingdom of God.

The word “flood” is used about 28 times in the Bible. It is used eleven times in the Book of Genesis and refers to God’s Judgment on the world for sin by the Great Flood.

It is used either in general terms or symbolically, twice in Job, five times in Psalms, once in Proverbs, Isaiah and Nahum, once in Luke.

It is used in reference to God’s Judgments, once in Daniel, twice in Matthew, once in Luke once in 2 Peter and once in Revelation. All of these references are related to the End of Days in some way, except for 2 Peter.

But I want us to focus on the mention of a flood in conjunction with God’s Judgment and the “End of Days” as mentioned, in Daniel 9, Matthew 24 and Revelation 12.

Is there ANOTHER type of Flood Coming?