Emmanuel – God with Us 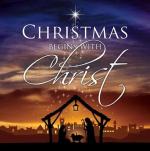 An Angel announced the arrival of Jesus Christ, saying, (Luke 2:10) “Do not be afraid; for behold, I bring you good news of great joy which will be for all the people; 11 for today in the city of David there has been born for you a Savior, who is Christ the Lord.”   These words were heard by a few, but since that date, have been repeated throughout history.  The time had come and the stage had been set for “God’s Revolution” on earth.

Thirty years later, Jesus announced His own arrival.  The few words He spoke were heard only by a few, but since that day, those words have been repeated and echoed throughout history.  These were among the most profound and urgent words ever uttered.

Rarely understood or properly acted upon, from a Spiritual perspective.  This proclamation marked the beginning of the end of an age and announced the establishment of the Kingdom of God on earth.

“From that time Jesus began to preach and say, “Repent, for the kingdom of heaven is at hand.”

THE BEGINNING OF THE END

There was a 400-year time gap (420BC to about 7BC) between Malachi, the last book of the Old Testament, and Matthew, the first book of the New Testament.  We assume “the old things had passed away; and behold, new things had come” with the birth of Christ.  Certainly, something new had begun, and Jesus was new, in every sense.  But, this coming Messiah, had been anticipated and written since the beginning of creation.  The Messiah’s’ coming had been specifically prophesies by Isaiah around 8 BC.  Jesus birth was the also birth of a new thing coming, but, “the pronouncement” had not yet been made and “the line in the sands of time” had not yet been drawn.

Jesus was born, grew up and matured in and around the towns of Bethlehem, Galilee and Nazareth.  But, the heavens were opened when Jesus was baptized and a new light was about to dawn as Jesus heard that John had been taken into custody.  Jesus, at this point, withdrew into Galilee; and left Nazareth and settled in Capernaum, which is by the sea, in the region of Zebulun and Naphtali. This was to fulfill what was spoken through Isaiah the prophet:

”From that time, Jesus began to preach and say, “Repent, for the kingdom of heaven is at hand.”

THE KINGDOM IS UPON YOU

Jesus had drawn a line, a demarcation, a boundary in sands of time and history, defining the old from the new.

Jesus was saying to all who would hear, the old had now passed and the New had come.  There was a radical change at hand, and a renovation in our way of thinking seeing and interacting with the world must take place.  Jesus was ‘turning the world right-side up’.

WHAT DOES IT MEAN?

Repenting is the act of changing your mind to conform to the Mind of Christ, which means your mindset, your values, and your worldview is changed.  Some would say you then live by new standards.  But it is much greater than just living by new standards.

You will have the mind in you which is in Christ Jesus, Who although existed in the from of God, did not regard His equality with God a thing to be held onto, but emptied Himself, taking on the form of a bond-servant and humbled Himself by becoming obedient to the point of death.

Jesus now calls you His friend, His brother or sister, a joint heir.  You too, are called to empty yourself, taking on the form of His bond-servant and humble yourself, becoming obedient even to the point of death.

You will do His Works and even greater works because He has gone to be with The Father.  Or more properly said, He will do His works through you.

A COMMAND AND A PROPHETIC WORD

These Words of Jesus are both a Command and a prophetic Word from God.  Jesus said this is what we are to do – Repent – in order to become His disciple and to follow Him. The disciples echoed and repeated these very words as they continued to do the Works of God, “Repent, for the Kingdom of Heaven is now at hand”.  These should also be our words.

WHAT DOES THIS MEAN TO ME?

Jesus says for each of us to Repent as an act of our will and that Repentance will allow the Holy Spirit to come into our bodies, our minds and regenerate our spirits.  We will become One with Him.  Our fleshly desires begin to fade and our new desires emanate from the Holy Spirit of God.  It is not us producing Spiritual Fruit, it is from The Holy Spirit and it should pour out of us, liberally. We begin to desire the Things of God.  We are made new and we can now walk with certainty, with purpose and power in our New Life.

SEATED WITH JESUS IN THE HEAVENS

Our position has changed.  “God, being rich in mercy, because of His great love with which He loved us, 5 even when we were dead in our transgressions, made us alive together with Christ (by grace you have been saved), 6and raised us up with Him, and seated us with Him in the heavenly places in Christ Jesus, 7 so that in the ages to come He might show the surpassing riches of His grace in kindness toward us in Christ Jesus. 8 For by grace you have been saved through faith; and that not of yourselves, it is the gift of God; 9 not as a result of works, so that no one may boast. 10 For we are His workmanship, created in Christ Jesus for good works, which God prepared beforehand so that we would walk in them.”

We are seated with Jesus, in the Heavens, at the right hand of the Father. Now, we are in position.  Now, Jesus does His Works which He prepared ahead of time, through us

THE KINGDOM OF HEAVEN IS WITHIN YOU

THE KINGDOM OF HEAVEN IS NOT A PLACE

Romans 14:17  for the kingdom of God is not eating and drinking, but righteousness and peace and joy in the Holy Spirit.

1 Corinthians 4:20  For the kingdom of God does not consist in words but in power.

This Kingdom is real, but, it is not so much a defined territory as it is the dominion, authority and the power of God manifest.  Jesus demonstrated Kingdom Life as He went throughout all Galilee, teaching in their synagogues and proclaiming the gospel of the kingdom, and healing every kind of disease and every kind of sickness among the people. The news about Him spread throughout all Syria; and they brought to Him all who were ill, those suffering with various diseases and pains, demoniacs, epileptics, paralytics; and He healed them.

THIS IS OUR CALLING!

If you are living in the sin of doubt or fear,  “Repent  –  for the kingdom of heaven is at hand.”

Change your mind, now. Change your way of thinking and from now on hold on to this understanding and perception.

If you are living under the oppression of poverty, sickness, lack or want, “Repent, for the kingdom of heaven is at hand.” Rise up.  Proclaim the gospel of the kingdom, for He has prepared His good works ahead of time that we may walk in them.  Works of healing every kind of disease and every kind of sickness, works healing all who are ill, those suffering with various diseases and pains, demoniacs, epileptics, paralytics; He heals them all.  (Matthew 4:24)

Revelation 21:5 And He who sits on the throne said, “Behold, I am making all things new.” And He said, “Write, for these words are faithful and true.” 6Then He said to me, “It is done. I am the Alpha and the Omega, the beginning and the end. I will give to the one who thirsts from the spring of the water of life without cost. 7“He who overcomes will inherit these things, and I will be his God and he will be My son.”

Let’s not take matters into our own hands.  His Works are complete, He has given us His Authority and sent us.  Now, let’s walk therein!   This changes everything!