Have you ever told a lie?  Do you still lie?  What can that possibly mean for you? 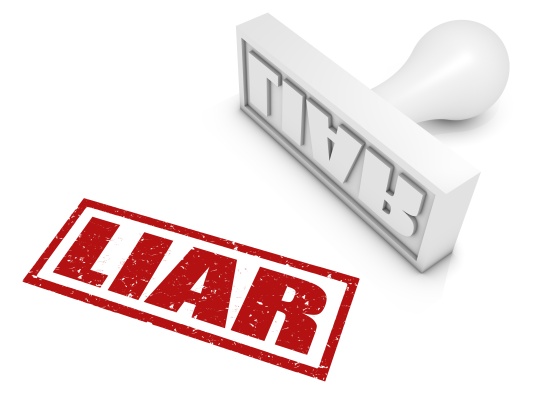 Leonard Saxe, Ph.D., a polygraph expert and professor of psychology at Brandeis University, says, “Lying has long been a part of everyday life. We couldn’t get through the day without being deceptive.” Yet until recently lying was almost entirely ignored by psychologists, leaving serious discussion of the topic in the hands of ethicists and theologians.  https://www.psychologytoday.com/us/articles/199705/the-truth-about-lying

Some of the seemingly nicest (and most convincing) people I have ever met turned out to be notorious liars.  They are nice, that is, until they are discovered or threatened with discovery.  Then, they can be as  mean as “the devil himself” –  literally.

They rarely show remorse of conscience when confronted with or caught in lies, unless it is false remorse to mask their previous lies.

To make it simple:  Liars lie.  And, liars will lie to the bitter end.  They will attempt to justify their every lie and most would rather die than admit their lies, because they cannot.  They simply cannot admit they are liars and deceivers.

“Good Liars” don’t even have to work at their art of deceit because “good liars” are pathological.  They are trapped in their own device, or put more accurately, trapped in the devil’s device of deception.  They are so completely deceived that they absolutely believe their lies to be the “justifiable truth”.

James 3:14  But if you have bitter jealousy and selfish ambition in your heart, do not be arrogant and so lie against the truth. 15 This wisdom is not that which comes down from above, but is earthly, natural, demonic. 16 For where jealousy and selfish ambition exist, there is disorder and every evil thing. 17 But the wisdom from above is first pure, then peace-loving, gentle, reasonable, full of mercy and good fruits, impartial, free of hypocrisy. 18 And the fruit of righteousness is sown in peace by those who make peace.

LIE – disordered (thinking – not to be confused with disorderly)

Sadly and tragically, a person who lies continually and over a long period of time, sears their conscience and can no longer see themselves as liars – they just cannot – the sin has become pathological, therefore, they have no conscience or remorse about the evil and harm they perpetuate and inflict on others.

John 8:44  “You are of your father the devil, and you want to do the desires of your father. He was a murderer from the beginning, and does not stand in the truth because there is no truth in him. Whenever he tells a lie, he speaks from his own nature, because he is a liar and the father of lies. 45 But because I say the truth, you do not believe Me. 46 Which one of you convicts Me of sin? If I speak truth, why do you not believe Me? 47 The one who is of God hears the words of God; for this reason you do not hear them, because you are not of God.”

Romans 3:4  Far from it! Rather, God must prove to be true, though every person be found a liar, as it is written:

“SO THAT YOU ARE JUSTIFIED IN YOUR WORDS,

AND PREVAIL WHEN YOU ARE JUDGED.” 5 But if our unrighteousness  demonstrates the righteousness of God, what shall we say? The God who inflicts wrath is not unrighteous, is He? (I am speaking from a human viewpoint.) 6 Far from it! For otherwise, how will God judge the world? 7But if through my lie the truth of God abounded to His glory, why am I also still being judged as a sinner? 8 And why not say (just as we are slanderous as reported and as some claim that we say), “Let’s do evil that good may come of it”?  Their condemnation is deserved.

9 What then? Are we better than they? Not at all; for we have already charged that both Jews and Greeks are all under sin; 10 as it is written:

“THERE IS NO RIGHTEOUS PERSON, NOT EVEN ONE;

11 THERE IS NO ONE WHO UNDERSTANDS,

THERE IS NO ONE WHO SEEKS OUT GOD;

12 THEY HAVE ALL TURNED ASIDE, TOGETHER THEY HAVE BECOME CORRUPT;

THERE IS NO ONE WHO DOES GOOD,

THERE IS NOT EVEN ONE.”

13 “THEIR THROAT IS AN OPEN GRAVE,

WITH THEIR TONGUES THEY KEEP DECEIVING,”

“THE VENOM OF ASPS IS UNDER THEIR LIPS”;

14 “THEIR MOUTH IS FULL OF CURSING AND BITTERNESS”;

15 “THEIR FEET ARE SWIFT TO SHED BLOOD,

16DESTRUCTION AND MISERY ARE IN THEIR PATHS,

17AND THEY HAVE NOT KNOWN THE WAY OF PEACE.”

18 “THERE IS NO FEAR OF GOD BEFORE THEIR EYES.”

Acts 5:1  “But a man named Ananias, with his wife Sapphira, sold a piece of property, 2and kept back some of the proceeds for himself, with his wife’s full knowledge, and bringing a portion of it, he laid it at the apostles’ feet. 3 But Peter said, “Ananias, why has Satan filled your heart to lie to the Holy Spirit and to keep back some of the proceeds of the land? 4 While it remained unsold, did it not remain your own? And after it was sold, was it not under your control? Why is it that you have conceived this deed in your heart? You have not lied to men, but to God.” 5 And as he heard these words, Ananias collapsed and died; and great fear came over all who heard about it. 6 The young men got up and covered him up, and after carrying him out, they buried him.

1 John 1:5  “This is the message we have heard from Him and announce to you, that God is Light, and in Him there is no darkness at all. 6 If we say that we have fellowship with Him and yet walk in the darkness, we lie and do not practice the truth; 7 but if we walk in the Light as He Himself is in the Light, we have fellowship with one another, and the blood of Jesus His Son cleanses us from all sin. 8 If we say that we have no sin, we are deceiving ourselves and the truth is not in us.

9 If we confess our sins, He is faithful and righteous, so that He will forgive us our sins and cleanse us from all unrighteousness.

10 If we say that we have not sinned, we make Him a liar and His word is not in us.

Colossians 3:9 Do not lie to one another, since you stripped off the old self with its evil practices,

11.   THE ASSURANCE – NO CONDEMNATION

12 So then, brothers and sisters, we are under obligation, not to the flesh, to live according to the flesh— 13 for if you are living in accord with the flesh, you are going to die; but if by the Spirit you are putting to death the deeds of the body, you will live. 14 For all who are being led by the Spirit of God, these are sons and daughters of God. 15 For you have not received a spirit of slavery leading to fear again, but you have received a spirit of adoption as sons and daughters by which we cry out, “Abba! Father!” 16 The Spirit Himself testifies with our spirit that we are children of God, 17 and if children, heirs also, heirs of God and fellow heirs with Christ, if indeed we suffer with Him so that we may also be glorified with Him.”

“THE LETTER OF THE LAW KILLS, BUT THE SPIRIT GIVES LIFE”

It is written, in Matthew 3:4  “Such is the confidence we have toward God through Christ. 5 Not that we are adequate in ourselves so as to consider anything as having come from ourselves, but our adequacy is from God, 6 who also made us adequate as servants of a new covenant, not of the letter of the law but of the Spirit; for the letter kills, but the Spirit gives life.

Jeremiah 17:9-11 says, “The heart is more deceitful than all else, and is desperately sick; who can understand it?  The Lord searches the heart and tests the mind in order to give to each person according to his ways, that is, according to the results of his deeds.”

Galatians 5:19-21 tells us that people who practice “deeds of the flesh”, such as lying and things like that, will not inherit the Kingdom of Heaven.  This is the issue.  JESUS is the cure!

BELIEVE ON THE LORD JESUS.  CONFESS YOU SINS; REPENT FROM THEM; CONFESS HIS NAME AND TRUST HIM.

He heals all your physcial, psychological, moral and spiritual diseases.

Matthew 4:23 “Jesus was going about in all of Galilee, teaching in their synagogues and proclaiming the gospel of the kingdom, and healing every disease (nósos = physical diseases) and every sickness (malakia = softness, weakness, illness = from = malakos: soft, effeminate, of a catamite, a male who submits his body to unnatural lewdness, moral sickness) among the people.