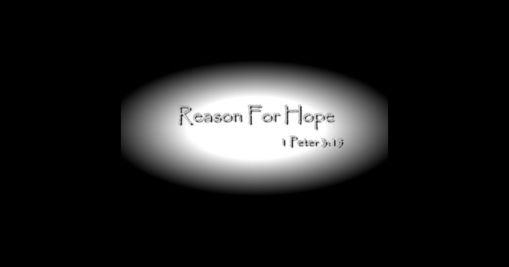 But in your hearts, revere Christ as Lord.

Always be prepared to give an answer to everyone who asks you to give the reason for the hope that you have.

Is this a ‘God Thing’ that happened?

I was browsing the internet looking at local churches and I came across one named “Rock Church”. Great sounding name, I thought. So, I looked at the website and gathered a few details. I wondered if I should visit this small storefront startup church. In fact, I felt oddly attracted to the idea. But, I couldn’t come up with a good reason, so I said a short prayer for the pastor and the church and moved on.

A couple of weeks later, I was shopping for a weed killer in a Lowe’s store and struck up a conversation with another shopper. This fellow was in the same department and look like he had been working in the yard, also.

“So, which of these is a good weed killer for this area?”, I asked.

“I don’t really know”, he replied. “I was hoping you could tell me”.

“Well, this one says it kills fifty or so kinds of weeds and won’t kill the grass”, I smiled, “But, who knows? Are you from here?”, I asked.

“Yes”, was his simply reply. But he didn’t have the North Carolina Mountain drawl, so I took a chance and pressed him.

“So, which church do you pastor”, I guessed at this, and I really don’t know why I would ask such a silly question.

His eyes widened, and his jaw went slack, “Do I know you?”, he blurted.

“Yes, I am”, He announced. He gave me his name, stuck out his hand and told me his church is a new church named The Rock Church.

Now my jaw went slack. “The storefront?”, I asked?

He told me a little about himself and how he became the pastor, then he invited me to his church.

“Great and thank you”, I said. But remembering I couldn’t come up with a good reason to visit this church, I decided to ask him a question. “First, I have just one question for you”.

“Why should I visit your church?”, I said, again.

He looked perplexed. “Huh?”, he stammered. “Well, because I invited you and would like to have you as a guest”, he replied.

“Thank you”, I said, “But, why? Why should I visit your church. I have a church, and I am not a church hopper. So, I am wondering if I should visit and why?”

I told him I would stay in touch via his church’s email and went our ways.

“Well, that was a lost opportunity”, I thought. But it puzzled me why I was feeling this way and why I was having these thoughts.

Betty (my wife) and I were walking through a local park the 4th of July evening. We walked through a pavilion area and I noticed a sign that said “Rock Church Picnic here”. I approached a group of older men sitting in lawn chairs and asked if this was The Rock Church from the storefront. One man answered with a broad smile, “It sure is. How are you?”

I answer that I was fine and that I had met the pastor of this church a year ago and asked if he was here?

The man pointed him out and proudly stated that he was the pastor’s father.

I greeted the pastor, and we had a friendly exchange. The pastor asked me why I had not contacted him?

I answered that I had emailed him through the church email address. We shook hands and went our ways.

The pastor’s father approached me and invited me to come to their church sometime. I related my exchange with his son the year earlier about an invitation and said, “So, I would like to respectfully ask you the same question, why should I visit? Any special reason you would invite me?”

The man look surprised and said, “Well, no. I am just trying to be polite and invite you to our church.”

I thanked him and turned to leave when the man said, “Wait a minute. Why would you ask me that?”

“Because I was wondering if it was you asking me or if it was God, or if you had a special reason”, I replied.

We both smiled and my wife and I left. As we were leaving, though, I think I saw here roll her eyes.

“So, do you think I was out-of-bounds with that question?”, I asked.

She just smiled and told me that if I didn’t want to go I should just say so, or I could have told them I already had a church.

“Yes, I suppose I came off a bit weird or rude?” I asked.

She rolled her eyes again.

“Well, I’ll tell you. I sort of wanted to go to that church at one time. Seemed like the Holy Spirit was prompting me. But, I also felt like the Lord was telling me to ask that question. It gave them a chance to tell me about the reason for the Hope they have.

“Or are they just meeting? I am retired now, and believe me, I am plenty tired of meetings.”

You see, I was once lost, without God. My life had spiraled out of control.

I had no job and a poor education. My wife and I split up. We had no children. My side of my family was worse off than me.

I had no hope.

But, God found me and bought me back from destruction.

He forgave my sins. He gave me a new start.
He restored my marriage.

He restored my health.
He gave me knowledge and wisdom.
He blessed us with children.

So, if you ever ask, I will tell you that JESUS IS MY HOPE AND MY FUTURE

How about you? Do you think I was out of line? Do you have a reason for your hope?

“We have this hope as an anchor for the soul, firm and secure. It enters the inner sanctuary behind the curtain, where our forerunner, Jesus, has entered on our behalf.”

Do you have a story or a Reason for your hope? Share it below…

One thought on “THE HOPE WITHIN YOU”