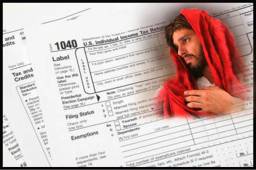 Double-Drachma tax – what’s in your wallet

(and where is your focus)?

Everywhere I look, I see political division, disputes and even downright hatred. The news revels in it and prospers from it; the television broadcasts it almost non-stop; the radio blares it; my friends talk about it and signs along the roadways advertise it.

It’s a harmful distraction. Are you sick of it? I know I am sick of it.

I wonder how I could better handle these distractions. I wonder how Jesus handled politics, political ideologies and the divisions that steal my attention? I need an example of how to keep my attention on what is important and vital for healthy living. How about you?

One of the hot topics of this day has to do with taxes. We can see several examples in the Bible. Let’s start there:

25 He *said, “Yes.” And when he came into the house, Jesus spoke to him first, saying, “What do you think, Simon? From whom do the kings of the earth collect customs or poll-tax, from their sons or from strangers?”

26 When Peter said, “From strangers,” Jesus said to him, “Then the sons are exempt.

27 “However, so that we do not offend them, go to the sea and throw in a hook, and take the first fish that comes up; and when you open its mouth, you will find a shekel. Take that and give it to them for you and Me.”

There are many lessons for us to model in these four verses.

Just like in the 1st century, they are still collecting taxes in 21st century America.

But, the this double-drachma tax was unique. It was known as the two-drachma temple tax. In Moses’ time, each person over the age of 20 was to give a half-shekel offering (the equivalent of two Roman drachmas) for the support of the tabernacle (see Ex. 30:11–16). This practice was still being observed some 1,500 years later, in Jesus’ day, to maintain the temple. In Matt. 17:24. It is interesting here that the tax man asks Peter if his Teacher, Jesus, pays the tax.

Jesus uses this moment to teach Peter – and all of us – four important lessons. I suspect God recorded this in the Bible so all of us (His disciples) would learn.

1. The children of the ‘Kings of the earth’ were exempt from the poll-tax or customs tax, and Jesus points out that since this tax is for the Temple, which is His Father’s House, then He and His own family are also exempt.

LESSON: Jesus is the son of God. You and I as brothers of Jesus and as children of the Most High God, are exempt.

2. Even though it is legally right for Jesus and Peters to be exempt from the tax, Jesus says we are to pay the taxes so as not to offend.

LESSON: There may some laws are rules we should be exempted from, but, so as not to offend, we obey them as it is God Who has place this authority in place. (We obey unless, of course, the law of man is in direct opposition to God’s Law, then we obey God. And remember, sometimes we get oppressive government due to our disobedience to God.)

3. God speaks to Peter in his vernacular, in this case, that of a fisherman.

LESSON: God will speak to you as you are, where you are, in a language you can understand. Listen for Him.

4. God provides. In this case, God provides the necessary funds for Peter by miraculous means. This time God provided the exact need at exactly the right time.

LESSON: God makes provision for all His children, all the time, according to His timing. As we obey God and do what He says, then He will provide. Even when it seems mundane, it is always miraculous with God.

So, how do we keep our attention off the chaos and disorder of this world? (This is so simple, I am embarrassed I had to think it through)

Your Friend and Brother