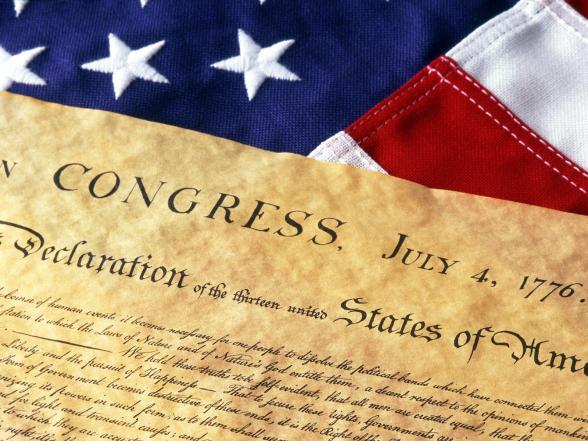 THE DECLARATION OF INDEPENDENCE

There is a saying, a proverb, in the book of Ecclesiastes 4:9-12, which goes like this:

“Two are better than one because they have a good return for their labor. For if either of them falls, the one will lift up his companion. But woe to the one who falls when there is not another to lift him up.

“Furthermore, if two lie down together they keep warm, but how can one be warm alone?

“And if one can overpower him who is alone, two can resist him. A cord of three strands is not quickly torn apart.”

The ancient wisdom of Ecclesiastes 4:9-12 is as true today as when it was written, and is becoming increasingly necessary if we are to resist the evil and darkness of Marxism spreading across the world, we must unite.

We have read the news stories, during the Obama administration, when factions of the FBI rounded up what they called “insurgency groups” or “white extremist groups”, arrested and charged them for sedition or as terrorist cells. These so-called ‘dangerous’ groups were usually men in their advanced years who, while drinking coffee at a local coffee shop, were overheard griping about government overreach and what they wish could be done about it. Obama’s ‘brown shirt Socialists’ were creating political a shock wave, creating fear and paranoia, silencing any dissent and free speech and sending a message to the masses:  “Comply with our agenda or pay the consequences”.

Then there was the ‘weaponizing of the IRS’ and of other government agencies to intimidate and deprive conservative and Christian groups and individuals of their rights. Again, a clear message that we, Socialists and Marxists (under the guise of the American Democrat Party), will not tolerate dissent.  (NOTE:  Coincidentally, the Biden Marxist-Democrat party’s  $3.5 trillion spending plan, contains a provision to spend $80 BILLION of your tax dollars to hire 87,000 new IRS agents to come after your money.)

How are they getting away with this blatantly un-American and illegal activity? They pick us off, one by one. We are not united, we are not organized, and our elected ‘conservative leadership’ is, by their actions, either ineffective, bumbling fools or are complicit with the Socialist-Marxist-Globalists.

WHAT ARE WE TO DO?

A quick footnote to mention that Donald Trump was an effective leader, a conservative and a friend of Israel, of Christians and of all Conservatives. Both political parties and the corrupt FBI turned on him with vicious lies, attacks on his personal businesses and family with outrageous and illegal political deceit.  The welfare of America was jeopardized by the corruption which emerged in our legal and political systems, all designed to destroy Donald Trump and his presidency.

This has a chilling effect for anyone who might consider a run for president as a conservative, unless he or she is a Marxist collaborator, the likes of George Bush, Mitt Romney or John McCain.

IS ANYONE OUT THERE?

There are scores of political action groups you can join. But, they are being largely ineffective. Their plan is to win at the ballot box, but, we have seen that process thoroughly compromised and corrupted in the last presidential election – and no one was charged with a crime. So, why bother with PACs?

You can find “Patriot Groups” and “Conservative Militia Groups”, but, from what I can tell, they are mostly just bluster.

There are many conservative broadcasters using non-traditional means (internet, podcasts, etc.) to get their message out and to influence, but, it is mostly just talk.

There was one recent event when hundreds of thousands of Conservatives and American Patriots ‘stormed the halls of congress’. The problem was that the LEFT knew it was about to happen and left the gates open, then co-opted a peaceful demonstration, calling it “a sad and tragic time in our democracy”. They had seeded the demonstration with Democrat-Marxist infiltrators who caused troubles, casting a bad light on an otherwise good intention. Still, a message was sent. A shot had been fired across the bow of the invading Marxist hoards who have illegally taken up residence in our nation’s highest offices. This demonstration seemed to get their attention and put them on notice as to what we could do, if Conservatives acted with a united and single purpose.

“Two are better than one because they have a good return for their labor. For if either of them falls, the one will lift up his companion. But woe to the one who falls when there is not another to lift him up.

Furthermore, if two lie down together they keep warm, but how can one be warm alone?

And if one can overpower him who is alone, two can resist him. A cord of three strands is not quickly torn apart.”

Now is the time to step forward and unite in action, as Conservatives. But, there is no leadership. I recognize that I am a lone and unqualified voice, calling out in the wilderness, “Who will lead us?”  But, if we do not act quickly, decisively and will iron clad resolve, we are finished as a Constitutional Republic. In fact, it may already be too late.

Please help. Write a letter to your Congressional Representative and your State Representatives. Ask for help to defeat the LEFT with definitive action.

I am writing you out of great concern for the future of our Nation. It seems to me that the Democrat party and their supporters are increasingly made up of people who endorse the agenda of Globalists, Marxists, Socialists and Communists, are dissolving our sovereignty, erasing our borders, violating and voiding our constitution, breaking our laws, raiding our treasury, promoting burdensome and onerous taxation and corrupting our society with debauchery and perversions which were unthinkable only a few decades ago. We are losing our freedoms and may have already lost our country and our way of life.

The political system and the ballot box, in our last national election, proved to be ineffective against the corruption, the tyranny and deceit of the LEFT.

We need strong, decisive leadership to fight back against this spreading virus of Marxism. We need men and women who, like our founders, are willing to say, “And for the support of this Declaration, with a firm reliance on the protection of Divine Providence, we mutually pledge to each other our Lives, our Fortunes and our sacred Honor.” (From the Declaration of Independence – click the blue text)

I am confident that here are hundreds of millions of American who will act in concert with a call to action by Conservative Leadership in our cause to save America. I am one of those.

(Your Name, address and State and District)

Next, please, pray for our Nation and your efforts.  Appeal to local Christian leaders, to local businessmen and businesswomen, and anyone else you think is willing to help lead this fight.

Please click the following link titles to read what you and I must know and what we can do – must do – as a response:

I realize this is a fairly long article.  But, please take your time to study each link and the information provided.  Then, if you are inclined, write to me at whitestonefellowship1@protonmail.com.  Let’s put a RESPONSE into action.

Your Friend and Brother,

NEXT:  A COSMIC STORM IS COMING.

PREVIOUSLY: THE OVERTHROW OF AMERICA BY SOCIAL-MARXISM.

Additional Reading: “A Grassroots Response to the Overthrow of America by Socialist-Marxists, a.k.a., the Democrat Party”