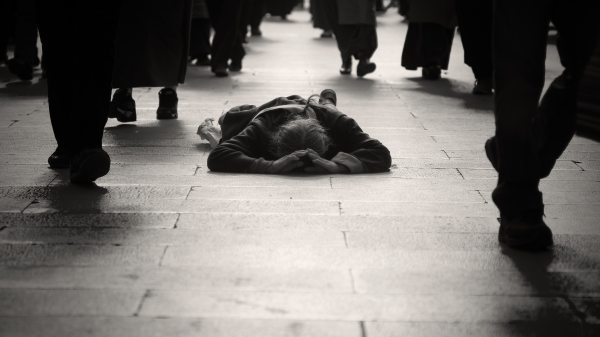 Blessed are the Poor in Spirit

Ever feel completely worn down and worn out? Your spirit is so downcast that you wonder if you will ever be able to get up again? You just feel like crying most of the time? You have tried everything and now you just hunger for some relief?

This is for you. The Bible, the Logos, The Living Word, Jesus, is still alive and still doing what He has always done. Thinking and believing otherwise is fatal. The Logos tells us that if you and I have faith the size of a mustard seed, we will say to the mountain, ‘Move from here to there,’ and it will move; and nothing will be impossible to you.

It is time to push through. Use faith:

Matthew 5:23 ¶ “Jesus was going throughout all Galilee, teaching in their synagogues and proclaiming the gospel of the kingdom, and healing every kind of disease and every kind of sickness among the people.

24 “The news about Him spread throughout all Syria; and they brought to Him all who were ill, those suffering with various diseases and pains, demoniacs, epileptics, paralytics; and He healed them.

25 “Large crowds followed Him from Galilee and the Decapolis and Jerusalem and Judea and from beyond the Jordan.”

(Now, see the Living Word in your mind and believe in your heart)

Matthew 5:1 “When Jesus saw the crowds,

(From this verse, we know that when Jesus “saw the crowds”; The Greek wording and tense tells us that Jesus sees, not only with His eyes, but, He sees with His mind, He perceives what He sees, He knows what He is seeing and He is acquainted with the experiences of the people and we know that He was calling them by their names.)

“He went up on the mountain; and after He sat down, His disciples came to Him. 2He opened His mouth and began to teach them, saying,”

v 3 “Blessed are the poor in spirit, for theirs is the kingdom of heaven.

How can I be Blessed while being poor in spirit? How can this give me the kingdom of heaven?

What is it to be ‘poor in spirit”?

What is the ‘kingdom of heaven’?

Let’s look the at words and meaning of

**To be “poor in spirit”, a person is in a state of falling down, terrified, feeling poor and near begging, destitute of wealth, influence, position and honor, feeling lowly, afflicted helpless, powerless to accomplish anything, they are in a state of ‘poor in spirit’.

It is in this condition that most people are ready and able give themselves up to Christ’s teaching and are able to find themselves able to lay hold of the heavenly treasure.

THIS IS WHERE IT BEGINS

AND INTO HIS SALVATION

1) royal power, kingship, dominion, rule; 1a) not to be confused with an actual kingdom but rather the right or authority to rule over a kingdom; 1b) of the royal power of Jesus as the triumphant Messiah

Heaven: Strong’s #3772 οὐρανός ouranos oo-ran-os’ AV-heaven 268, 1) the vaulted expanse of the sky with all things visible in it; 1) the region above the sidereal heavens, the seat of order of things eternal and consummately perfect where God dwells and other heavenly beings

(Think and meditate on this. The Bible says, when you are ‘poor in spirit’ “yours is the kingdom of heaven” =

the right or authority to rule over; Humbly submitted, yet, joint heirs with Jesus)

v 4 “Blessed are those who mourn, for they shall be comforted.

Of course you will mourn the loss of all you have and all you are.

The ‘rich young ruler’ went away sad just with the thought of being destitute, even though he did not give his wealth and status to the poor as Jesus said. (Matthew 19:16-26)

But, remember, you are mourning the loss of the temporal and inheriting the Eternal. Blessed, indeed.

So, mourn, dear one. Mourn deeply, until your tears run dry and your worries fade from exhaustion. Cleanse yourself. For you shall be comforted, indeed.

v 5 “Blessed are the gentle, for they shall inherit the earth.

A sweet gentleness settles over the person who has rid himself or herself of the weight and burden of the world. Cleansed by the mighty Hand of God, free at last to draw near to the Throne of God without fear or doubt.

Now, at last, in your life, “on earth as it is in heaven”. Yours is the kingdom of heaven and you shall inherit the earth.

This is the ‘process of sanctification’ and training in righteousness. As one ‘draws near to the Kingdom of Heaven’:

v6 “Blessed are those who hunger and thirst for righteousness, for they shall be satisfied. (To be continued)

1 Peter 1:6 “In this you greatly rejoice, even though now for a little while, if necessary, you have been distressed by various trials, 7so that the proof of your faith, being more precious than gold which is perishable, even though tested by fire, may be found to result in praise and glory and honor at the revelation of Jesus Christ;

Your Brother and Friend,
Enduring to the End

Please enable JavaScript to view the comments powered by Disqus.