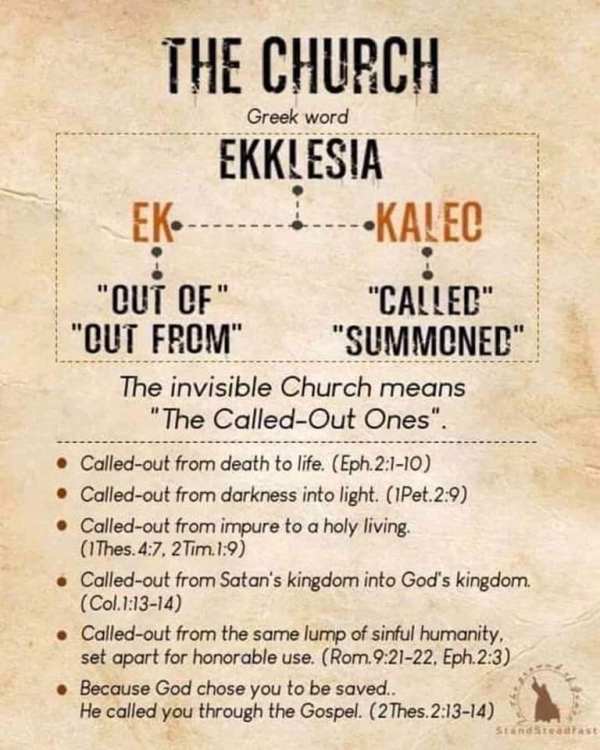 “It is an interesting paradox

that as the Church moves underground,

“The idea, that the Christians in the apostolic age, erected special houses of worship is out of the question.

The Saviour of the world was born in a stable, ascended to heaven from a mountain. His apostles and their successors down to the third century, preached in the streets, the markets, on mountains, in ships, sepulchres, eaves,and deserts, and in the homes of their converts.

“Thousands of costly churches and chapels have since been built and are constantly being built in all parts of the world to the honor of the crucified Redeemer – who in the days of his humiliation had no place of his own to rest his head!” — PHILIP SCHAFF, NINETEENTH-CENTURY AMERICAN CHURCHHISTORIAN AND THEOLOGIAN

“MANY CONTEMPORARY CHRISTIANS have a love affair with brick and mortar. The edifice complex is so ingrained in our thinking that if a group of believers begins to meet together, their first thoughts are toward securing a building. For how can a group of Christians rightfully claim to be a church without a building? (So the thinking goes.)

The “church” building is so connected with the idea of churchthat we unconsciously equate the two. Just listen to the vocabulary of the average Christian today:

“Wow, honey, did you see that beautiful church we just passed?”

“My goodness! That is the largest church I have ever seen! I wonder what the electric costs to keep it going?”

“Our church is too small. I’m developing claustrophobia. We need to extend the balcony.””The church is chilly today; I am freezing my buns off in here!”

“We have gone to church every Sunday this past year except for the Sunday when Aunt Mildred dropped the microwave oven on her toe.”

Or how about the vocabulary of the average pastor:

“Isn’t it wonderful to be in the house of God today?”

“We must show reverence when we come into the sanctuary of the Lord.”

“Or how about the mother who tells her happy child (in subdued tones), “Wipe that smile off your face; you’re in church now! We behave ourselves in the house of God!”

“To put it bluntly, none of these thoughts have anything to do with New Testament Christianity. Rather they reflect the thinking of other religions—primarily Judaism and paganism.

FROM HOUSE CHURCHES TO HOLY CATHEDRALS

“The early Christians believed that Jesus is the very presence of God. They believed that the body of Christ, the church, constitutes a temple. When the Lord Jesus was on earth, He made some radically negative statements about the Jewish Temple.’

“The one that angered many Jews most was His announcement that if the Temple was destroyed, He would build a new one in three days! (See John 2:19-21.)

“Though Jesus was referring to the Temple that existed in the architectural sense, He was really speaking of His body. Jesus said that after this temple was destroyed, He would raise it up in three days.

“He was referring to the real temple—the church—which He raised up in Himself on the third day (Ephesians 2:6).

“Since Christ has risen, we Christians have become the temple of God.

“At His resurrection, Christ became a “life-giving spirit” (1 Corinthians 15:45). Therefore, He could take up residence in the believers, thus making them His Temple, His house. It is for this reason that the New Testament always reserves the word church (ekklesia) for the people of God. It never uses this word to refer to a building of any sort.” (Excerpts from Frank Viola & George Barna’s book, “Pagan Christianity”, Tyndale Publishing, 2002, 2008)

“When Christianity was born, it was the only religion on the planet that had no sacred objects, no sacred persons, and no sacred spaces.

“Although surrounded by Jewish synagogues and pagan temples, the early Christians were the only religious people on earth who did not erect sacred buildings for their worship. The Christian faith was born in homes, out in courtyards, and along roadsides. For the first three centuries, the Christians did not have any special buildings!

“As one scholar put it, “The Christianity that conquered the Roman Empire was essentially a home-centered movement.”

“Meeting in homes was a conscious choice of the early Christians.”

“Then, in the late second and third centuries

Christians not only had adopted sacred spaces, they also had created sacred objects. (They would soon develop a sacred priesthood.) It might seem they had forgotten Moses and the golden calf.

“In all of this, the second and third century Christians began to assimilate the magical mind-set that characterized existent pagan thinking.

“These factors made the Christian terrain ready for the man who would be responsible for creating church buildings. In AD 327, Constantine began erecting the first church buildings throughout the Roman Empire, some at public expense.’ In so doing, he followed the path of the pagans in constructing temples to honor God.

“Interestingly, he named his church buildings after saints — just as the pagans named their temples after gods. Constantine built his first church buildings upon the cemeteries where the Christians held meals for the dead saints.

“Constantine brought peace for all Christians.'” Under his reign, the Christian faith had become legitimate. In fact, it had risen to a status greater than Judaism and paganism.

“For these reasons, the Christians saw Constantine’s rise to emperor as an act of God. Here was God’s instrument who had come to their rescue.

“Christianity and Roman culture were now melded together.”

“The Christian building demonstrates that the church, whether she wanted it or not, had entered into a close alliance with pagan culture.’ As Will Durant, author of The Story of Civilization (a sweeping, eleven-volume work on world history that earned him a Pulitzer Prize), put it, “Pagan isles remained in the spreading Christian sea.”

“This was a tragic shift from the primitive simplicity that the church of Jesus Christ first knew .The first-century Christians were opposed to the world’s systems and avoided any contact with paganism. This all changed during the fourth century, when the church emerged as a public institution in the world and began to “absorb and Christianize pagan religious ideas and practices.

“As one historian put it, “Church buildings took the place of temples; church endowments replaced temple lands and funds.”

“Under Constantine, tax exempt status was granted for all church property.

“Consequently, the story of the church building is the sad saga of Christianity borrowing from heathen culture and radically transforming the face of our faith.

“To put it bluntly, the church buildings of the Constantinian and post-Constantinian era essentially became holy shrines. The Christians embraced the concept of the physical temple. They imbibed the pagan idea that there exists a special place where God dwells in a special way. And that place is made “with hands.”‘

“As with other pagan customs that were absorbed into the Christian faith (such as the liturgy, the sermon, clerical vestments, and hierarchical leadership structure), third- and fourth-century Christians incorrectly attributed the origin of the church building to the Old Testament. But this was misguided thinking.”

“Most Americans are struggling to clarify their identity. They tend to see themselves as unique individuals, Americans, members of their family, occupational professionals, consumers, and then as followers of Christ — in that order of priority.

“In the minds and hearts of most Americans — even those whose beliefs classify them as “born-again Christians”— their identity as a follower of Christ pales in importance in comparison to the other roles they embrace.

“Oddly, most of the born again Christians consider themselves to be servants of God and to have been transformed by their faith in Christ.

“Clearly, there are some missing connections in this self-evaluation. Perhaps the confusion is due to the enormous number of inter-actions and responsibilities that people take on each day.

“Maybe it has to do with the disjointed, topical teaching that most of us receive from our churches. It may even be attributable to the lure of competing perspectives and images bombarding us from the ever-present media.

“The bottom line is really quite simple: You are a priest of God, a minister of the Lord Jesus Christ, and a member of His glorious body. Through your declaration of allegiance to Jesus and your stated desire to live with Him forever, you have a responsibility to be a functioning priest, minister, and member of the Body .

“The organized church has moved down a winding path over the past two thousand years. The only way to get it back on track is for each of us to begin prayerfully exploring the original plan that God had for His people, and then to be willing to respond faithfully to that plan.

“In this way, the Revolution that has begun to take root in our day will spread far and wide. And God will get what He has always been after.” (Excerpts from Frank Viola & George Barna’s book, “Pagan Christianity”, Tyndale Publishing, 2002, 2008)

So, where can I go from here? Click the following link to another page, read it, and begin to pray for God’s Wisdom and discernment. an-invitation

I humbly offer this after eleven years of prayer, study, seeking God, asking for His Wisdom to know and follow His Call. I sincerely and prayerfully urge you to do the same.

Your Brother and Co-Laborer,

More links on this site about “The Church”

What is God Saying to His Church – You and me

Consumerism in the Church?

Is this the Church?

Socialism in the Church?